Monuments Across the United States Re-Emerged as Targets of Rage 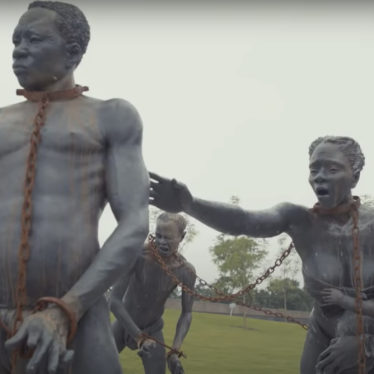 The protests in the USA have led to the removal of many statues in honour of racist personalities. In Richmond, Virginia, for example, protesters scribbled on a monument to Confederate Army Commander Robert E. Lee as an act of resistance against police brutality and racism. They wrote “Black Lives Matter,” “Blood On Your Hands” and “Stop White Supremacy” in spray paint.

Following Virginia Governor Ralph Northam’s announcement to take down the Robert E. Lee statue on Monument Avenue, 14-year-old ballet dancers took to the monument to strike a pose on 5 June 2020. «This monument represents our past and in order to not repeat it, we have to reconcile and come together», Ava Holloway said in an interview mit supermajority.com. «Dance does that. It brings people together.» Ava Holloway and Kennedy George are dancers at the Central Virginia Dance Academy where they celebrate each other’s diversity and gifts. «We are using dance to spread awareness, positivity and to bring everyone together in the community.» She also explained, that «Ballet is one of the hardest types of dance; we are going through a very hard time. I connected a time full of hate with something that gives me so much joy . . . What better way to bring the best out of something by doing what you love?»

On June 8, a judge at Richmond County Court issued a ten-day injunction, citing a complaint by William C. Gregory, who claims Virginia promised to “faithfully guard” and “lovingly protect” the statue when the land on which it stands was annexed by the state in 1890.

Not only in the USA, but also in Europe statues are currently falling. It started with a statue of the slave trader and philanthropist Edward Colston in the British port city of Bristol, which was thrown into the sea during a demonstration. In the Belgian city of Antwerp, a statue of King Leopold II will end up in a museum after being thrown paint at it.

The destruction or removal of statues is not necessarily the right way to deal with the unloved historical heritage, says historian Gesine Krüger in an interview with SRF.