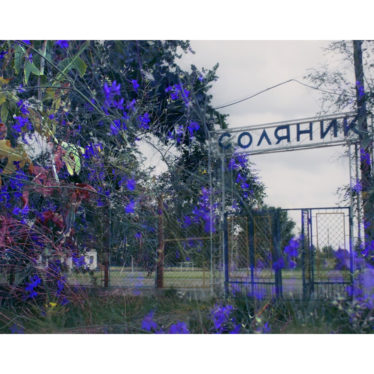 SB: “To Watch the War” is the name of the exhibition at Coalmine – Raum für Fotografie in Winterthur. The news on TV, on the radio and in the newspapers report daily about the war in Ukraine, giving us a certain image of the war. You both live in Kyiv. In Winterthur, you present a different perspective on the current events and thus also a different proposal to look at this war. What aspects did you want to transmit in the exhibition?

OK: The war in Ukraine is not an invasion that started this past February, it started eight years earlier. These are occurrences that are largely influenced by global and long-term processes. This requires a different way of looking at them, one that is not focused on sensationalism. The fact that war is mediated to a large extent by the media – on the one hand by the military with the help of the latest technologies, on the other hand by social media – led us to organize a spatial situation in which not one particular perspective is presented, but the viewers are confronted with many different ways of perceiving war. We wanted to enable an experimental way of film reception.

OR: “To Watch the War” is an exhibition on innovative moving image practices and experimental film and video art. On the one hand, this has to do with the origins of the war in Ukraine: To put down the popular uprising of the Maidan in Kyiv, Russia started initially a counter-revolutionary invasion in 2014. This uprising was primarily a media event and articulated itself through moving images. For me, the exhibition is also an exploration of the ways in which filmmakers respond to war. Two questions in particular preoccupied me in the process of curation: How is the complex and multifaceted relationship between war and cinema articulated in the video works? And to what extent does war produce, or at least influence, new forms of cinema? Gilles Deleuze wrote in his books that modern cinema is a product of the Second World War and of various spheres of destruction. The war in Ukraine is just one example of the close intertwining of war and cinema. In many countries that experienced wars, a new avant-garde of cinema and experimental filmmaking developed. Almost all the video works we have selected were created during the last eight years and in response to the Russian invasion in 2014.

SB: How did you choose the different film projects?

OR: Last fall, Annette Amberg – she is the curator of the room for photography at the Coalmine – and I sat together in the jury of the short film festival Internationale Kurzfilmtage Winterthur. Annette asked me at the time what was currently happening in experimental film in Ukraine. When she then invited me in March to do an exhibition, I initially wanted to say no. It was unthinkable for me to plan an exhibition at that moment, but at the same time I thought it was brave. I am a filmmaker myself and have been following experimental filmmaking in Ukraine for years. Many of the filmmakers who can now be seen at the Coalmine are part of the film scenes of Kyiv and Mariupol. Normally I don’t do exhibitions, but I have already put together film events and online programs in both cities and therefore know many filmmakers. I have also worked with some of them, others I didn’t know personally before. Although the experimental scene is very diverse, it is not very big. The number of practicing filmmakers is therefore quite manageable. Olexii writes a lot about experimental films and video art, so s*he is also closely connected to the film scene.

OK: When Oleksyi asked me in March if I would be interested in putting together the exhibition with him, I had just moved to Lviv and was living in an apartment there with seven to ten people – among them were some of the filmmakers who are now exhibiting a video work here in Winterthur. We started to organize experimental screenings with some of them, which probably has an impact on the exhibition in Coalmine. The preparation for the exhibition was therefore also a way for us to deal with the situation in Ukraine.

SB: What is it like for you to present the video works in a place that seems to be far away from the actual events of the war? What role does the exhibition situation, especially the physical distance, play for you?

OR: It seems that the war is not so physically close. But on many levels, the war is also taking place directly in Switzerland, because it is a war for access to resources. A lot of war-related business is done by companies in Switzerland. Nordstream AG, for example, has its headquarters in Switzerland. Such entanglements are not explicitly mentioned in the exhibition. We think it is not necessarily the task of artists to talk about it, we want to use the space here for more subtle messages. Moreover, it is not an exhibition in which only Ukrainian filmmakers are involved. We have also included some artists from other countries. Every work that is shown here deals with the relationship between media and war and refers to the invasion that has been going on since 2014.

OK: The distance between Switzerland and Ukraine itself is an effect created by media practices, mass media in particular. These practices try to create an objectivity that tries to avoid localizing the war. However, the last months showed that the war itself is global – not only in terms of transfer of financial resources such as gas or oil, but also in terms of international or transnational networks of solidarity and support. We have tried to overcome the distance in the exhibition. It is not the same space as in Ukraine, but it is also not outside the war. Moreover, many of the video works are not only available in the exhibition space, but also on the Internet, so that the visitors can learn what is going on through the films.

SB: In the video works, there is a wide range of different techniques as well as experimental approaches to documenting war and communicating experiences. To what extent can these different kinds of moving images contribute to the viewer’s different approach to the question of what war is and how it is documented?

OR: The exhibition is in itself an experiment. It is a retrospective on an important historical period. It shows the way different artists have responded to it, reconceived it, or perhaps even created it. “To Watch the War” presents a very subjective selection. The production of moving images has been so immense in recent years that this exhibition could include completely different films. However, Olexii and I have tried to turn this space at Coalmine into a kind of experimental cinema. The viewers can spend the whole day here watching the films. This exhibition is perhaps also a proposal for how art spaces can deal with or experiment with new and different ways of seeing. This is also the reason why the films are so different in their aesthetics.

SB: Many videos deal with grief, even if the act of mourning itself is not visible. The artists deal with landscapes that no longer exist today – because entire areas are on the front line, are occupied, and some of them, like the city of Mariupol, have been completely destroyed in the recent months.

OK: For us it was important to articulate other, temporary forms of violence through video works. When we think of war, we have the impression that it is waged by people against people. It is a war of humanity as a subject of colonial software and military technologies countering other ‘minor’ formations of human bodies, who are not even necessarily considered as humans can can be guaranteed by the institutions of human rights. At some point, it is also a war of human beings against nature. It involves issues that affect entire territories and landscapes. These are not only occupied, but also destroyed by strategic invasions. Many of the video works are also about the intimate relationships of people to the landscape and to nature.

SB: The video artists not only document direct events with their cameras, they are affected by them themselves. Therefore, they need to position themselves in regard to the events of war. What responsibility do artists have when it comes to documenting war?

OR: I would say that it’s about the question of artistic truth. In our postmodern age, there is no longer an objective perspective, which presents us with new problems. For it is precisely in the media mediation of war that we see how fascist regimes like that of Russia use the idea about the non-existence of objectivity to legitimize any action. That there is no objectivity basically allows them to commit genocides: They can say that it didn’t happen and thereby call into question any statement. Art has never claimed objectivity for itself, but has always advocated truth. Making art is therefore also a way of reclaiming the truth. For me, the responsibility of artists is therefore to tell the truth.

Olexii Kuchanskyi is an independent researcher, film programmer and writer based in Kyiv and Lviv. Olexii’s main interests lie in experimental moving-image-art and collective visual practices. Olexii was a member of Occupy Kyiv Cinemas, an activist network for the protecting communal property at the risk of privatization.

Oleksiy Radynski is a filmmaker as well as an essayist and lives in Kyiv. His films have been screened at several international short film festivals, including Rotterdam, Oberhausen and Winterthur. He is also co-founder of the Visual Culture Research Center, an initiative for art, knowledge, and politics.

Sandra Biberstein is an editor at Coucou Magazin and a research associate in the SNSF-research project «Crisis and Communitas». She conducted the interview with Olexii Kuckanskyi and Oleksiy Radynski on September 16, one day before the opening of the exhibition.

For their video work “Labor Safety in the Region of Dnipropetrivsk” Andriy Rachynsky and Daniil Revkovsky worked with an extensive archive of videos from social media accounts. They use videos of workers from some Ukrainian industrial enterprises known for their poor working conditions. This resulted in a found-footage disaster film in 2018, which captures not only attacks by Russian planes on mining facilities, but also the war of people against nature.

In “Sky. Invasion” from 2022, Andriy Rachynsky and Daniil Revkovsky contrast impressive views of the sky and landscapes with encrypted messages from the Russian military. These messages were intercepted in late February during the first days of the Russian invasion of Ukraine. In the two-channel video installation, the artist duo has further developed its method of using found footage from online sources.

Zamglai nature reserve is one of the largest marshlands in Ukraine. Its name probably derives from the ancient Kurdish word “zong” (marsh). ruïns collective’s 2019 short film “zong” unfolds the complexity of this place’s history – as an exploited landscape in the industrial age, as a complex system of relationships between man and nature, and as an area that reduces the greenhouse effect and counteracts climate change.

For their video “Salty Oscillations”, Teta Tsybulnyk and Elias Parvulesco recorded a series of interviews with residents of Soledar in June 2021. The interviewees describe their perception of the steppe, their dreams of nature, animals and landscapes, as well as the symbolic meaning of salt in their hometown, which is known in the Donetsk region primarily for its salt industry