The Ogre Goes to Ukraine. A Commentary 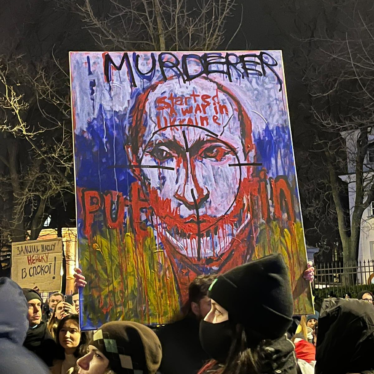 “The Ogre does what ogres can,

Deeds quite impossible for Man,

But one prize is beyond his reach:

About a subjugated plain,

Among its desperate and slain,

The Ogre stalks with hands on hips,

While drivel gushes from his lips.”

This poem entitled August 1968 was written by W.H. Auden in response to the Soviet-led invasion of Czechoslovakia. Auden’s depiction of the invasion as a cruel act by a monster incapable of speech expresses his disillusionment with the Soviet Union as well as the dialectical relation between primitive violence and manipulative narratives. The same dynamics hold true today as Russian tanks enter Ukraine.

Russia’s current leader is unable to explain the grounds for the invasion in a language that would be comprehensible to listeners outside his inner circle. With his talk of protecting human rights and preventing genocide, Putin imitates the language of democratic countries, but the only thing that comes out of his mouth is senseless drivel in the guise of political or historical statements.

In today’s Russia, the state terrorizes anyone who disagrees with the leader. Russian opposition leader Alexei Navalny was convicted of nonexistent crimes as punishment for revealing the scope of corruption among Putin’s cronies. The famous organization International Memorial, which researched Stalinist crimes, was closed a few months ago. People trying to protest against the war are being arrested. These sad events show that there are people immune to the leader’s narrative who have the courage to express their dissent and (unfortunately) face the consequences. These people, Russia’s conscience, will one day give the word “democracy” a real meaning. There is therefore something highly symbolic about the fact that the tortures currently facing Navalny include being forced to watch propaganda on Russian state television for several hours a day. His refusal to accept state messaging is a great moral struggle of our times.

In recent days, Putin has managed to manipulate the world into listening to his lengthy faux-democratic monologues, but he has not threatened the world enough to make it believe his lies. Accustomed to being surrounded by people who agree with everything he says and appear to find it convincing, Putin thought that (as a militaristic, nationalist dictator) he could frame “demilitarization”, “denazification” and “security guarantees” as excuses for a war that he presents, according to the “Russian perspective,” as a fight for peace.

The “Russian perspective” is essential to Putin’s statements, as apart from being a war criminal he is also an amateur historian.  Over the last several years, and especially during the Covid-19 pandemic, he has written articles about the history of Ukraine and Russia which try to prove that they are really one nation—a continuation of the early medieval Kievan Rus. The text did not find a positive response among either historians or popular audiences abroad but was presumably applauded in his inner circle.

After recognizing the independence of two self-proclaimed republics in Luhansk and Donetsk, he decided to take advantage of the world’s attention to try out both his “political” and “historical” lines of argumentation. He stressed the need to demilitarize Ukraine as a danger to Russia while explaining to Ukrainians that they are not a separate nation. Both strategies necessitated a military invasion presented as a “peacekeeping mission.” Claiming that Ukraine is a utopian idea dreamed up by Lenin, Putin condemned Ukrainians for taking down Lenin’s statues and threatened that to show them what “decommunization” really means.

This performance was too much for the global public (apart from Donald Trump, who apparently understands Putin-speak) and had the exact opposite of the intended effect. Over the past 20 years Putin-speak has consisted of rumblings about Russian history and current diplomacy that have led many journalists and intellectuals to speculate about the “Putin doctrine” or his philosophy of power. Now it is clear: there is no sense in his claims, only violence. Diplomats and top politicians who have been meeting with Putin over the past several months cancelled their upcoming appointments. He was left with his inner circle and ordered an invasion, which probably caused excitement among his team over what they see as the first step towards rebuilding the empire in its tsarist or Soviet form.

What they don’t see is what is now obvious to the world: Russia’s current regime does not represent the “Russian perspective” or “Russia’s security interests.” It only represents a gang of people around a corrupt dictator who pronounces senseless diatribes in order to justify violence. These monologues readily sell anything dear to Russians (like the memory of those who perished in the Second World War) and change it into drivel in hope of gaining domestic and international attention.

The members of Putin’s inner circle bear responsibility for the biggest conflict in Europe since World War II and have the blood of both Ukrainians and Russians on their hands. They are ogres rich from fossil fuels, which bring profits to the few while the masses bear the ecological cost.

The disillusioned world should no longer pretend to listen to Putin’s associates, who will seize on any chance they can get to spread Putin-speak. Sanctions and the exclusion of the regime from the international community are the only means of creating pressure that will lead not only to Russia’s long-term democratization, but also to the development of alternative energy sources. Banishing Putin-speak from all platforms is the only way to ban its underlying violence—a nightmare for Russians and Ukrainians and a danger to the rest of us.