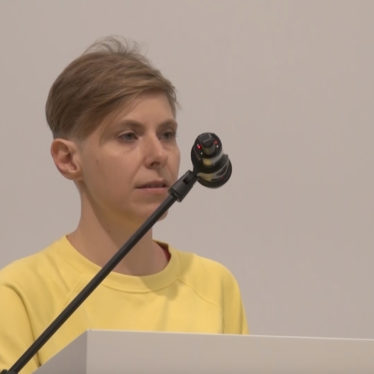 The process of political and economic transformation which started in Poland in late eighties is narrated in terms of regaining freedom and establishing democracy. The end of totalitarian regime brought the end of censorship, of political persecution, the beginning of the free market and free flow of commodities. But on the other hand Polish transformation can be also seen as a moment of deep crisis. Privatization of state’s enterprises, lands and buildings, almost instant change of language and culture, disappearing jobs and identities, new identities arising from new definition of the individual – this brutal process described wildly in frames of transition studies – requires some new conceptualizations.

What is important Polish transformation is deeply connected to the economic and political processes happening at the same time in United States of America. Like Elisabeth Dunn in her Privatizing Poland shows the transition from communist to capitalist state mirrors the transition from liberal to neoliberal system in the USA. Dorota Sosnowska would like to argue that one of the most prominent definitions of performance art – that by Peggy Phelan from 1993 – is deeply rooted in that transition. She defines performance art as ephemeral and immaterial in order to escape capitalist rule over the art understood as commodity. But – as it was shown by Phelan’s critics – by that same gesture she makes performance art even more vulnerable to capitalism, which is not interested in matter but in the experience – the best commodity in neoliberalism.

From that standpoint it becomes especially interesting that Polish art from 1990s being interested in body produces it’s images rather than performances. Dorota Sosnowska shows in her lecture that in the Polish context the individual experience, so important from the American point of view, gives way to the materiality of art and body able to produce political communities around it. The crisis of transformation appears in the way the body is used and conceptualized in arts and it is far from what Phelan understood as subversive potential of body in action. Using some examples Dorota Sosnowska likes to show different understanding of performativity, ephemerality and matter arising from different experience of capitalism in Polish context.

The lecture «Polish Transformation: Community Crisis and Question of Ephemerality in Arts» by Dorota Sosnowska took place on 15 November 2019 at the symposium «Crisis and Communitas».

Dorota Sosnowska is an Assistant Professor at the Institute of Polish Culture (Department of Theater and Performance) at University of Warsaw. She is working on conceptualizations of the body in the art and theater of the Polish long 1990s.