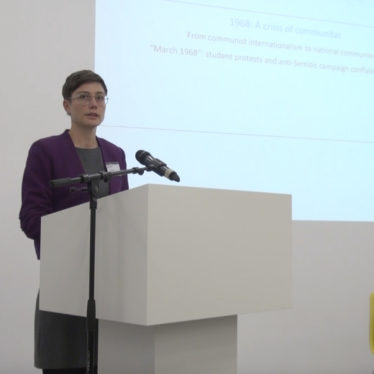 Even though communism initially builds upon a concept of communitas as an egalitarian, open community, its historical reality often turned out more on the side of immunitas: mechanisms of othering and detachment led to the exclusion and condemnation of people because of their class, beliefs, language or ethnical background.

“March 1968” symbolically marks a turn in the ideological outline of Polish communism. At that time voices for reform were violently silenced, and the replacement of nominal internationalism with “national” communism, heralded by intensified drawing of geo- and biopolitical borders, was now almost officially acknowledged. The cut-down on ideological freedom as well as the discursive mechanisms of division and exclusion provoked a feeling of isolation and loss of control over social situations and their interpretation. Instead of the proclaimed “solidarity” of the working class in communism, Polish citizens came to distrust not only the state, but also their neighbours and colleagues. This was especially true for Poles of Jewish descent, as they suffered from extreme exclusion in social networks, at the workplace, in culture and in the Party during an anti-Semitic campaign led by the authorities in 1967-1970, in the wake of the Six-Day War.

Nina Seiler aks in her lecture how affective bonding could be realised in such conditions of contested processes of communisation and immunisation. She is especially interested in the cultural mechanisms provoked by the destabilisation of interpersonal trust: can we find ways of human bonding trying to avoid the danger of being negatively affected? Does the atomisation of individuals lead to new forms of connecting going beyond the human race, embracing the animal or material world? How does the relation to the (own) body and its activities change? These questions I will discuss on examples in the [literary] production 1968-1970.

The lecture «Crisis of Communitas or the Extension of «Our» World» by Nina Seiler took place on 14 November 2019 at the symposium «Crisis and Communitas».

Nina Seiler is a postdoctoral researcher affiliated with Interart (Eastern Europe) at the University of Zurich. With her research on immunitarian/communitarian processes around the Polish «March 1968», she is part of the SNSF project Crisis and Communitas. Performative Concepts of Commonality in the Polish Culture since the Beginning of the 20th Century. Her book Privatisierte Weiblichkeit. Genealogien und Einbettungsstrategien in der feministischen Kritik im postsozialistischen Polen (Privatised Femininity: Genealogies and Strategies of Implementation in Feminist Criticism in Post-Socialist Poland) was published in summer 2018.