Webinar Theater and Communitas #3: Come Together and Enter Full Screen by Wojtek Ziemilski 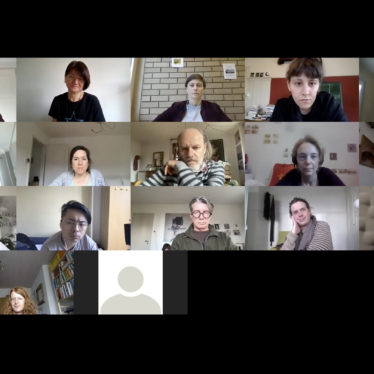 Above a stage played by five actors, an inscription forbids the sitting audience from entering the stage. Yet this is what the actors of Come Together relentlessly invite the spectators to do throughout the entirety of the performance. Through all kinds of speeches and actions, the actors provoke the audience in a sometimes seductive, sometimes imploring or even authoritative manner to get them on stage – all their efforts remaining unsuccessful. While the stage appears as a possible site of “togetherness”, an inaccessible “common ground”, the audience turns into the main actor in the play.

Pushing the relationship between stage and audience to the extreme, Come Together addresses the ideals and conventions of theater with playful and desperate self-derision: Is theater really capable of bringing together actors and audience for an evening in spite of their differences and inequalities? Or is the promise of an ephemeral community the last illusion of contemporary theater? Doesn’t the theater rely upon a power relationship between those who look and those who act? Is this power relationship capable of being thwarted? We will discuss these and other questions with Wojtek Ziemilski, director of the play.