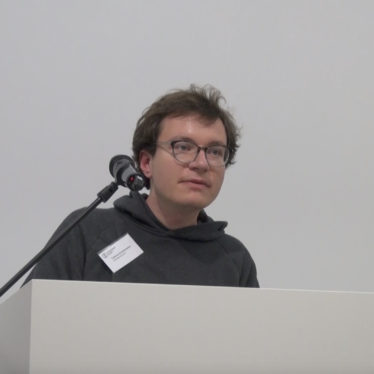 “The refugee should be considered for what he is, that is, nothing less than a border concept that radically calls into question principles of the nation-state and, at the same time, helps clear the field for a no-longer-delayable renewal of categories” – states Agamben in his essay «We refugees», claiming that a refugee is no more a person seeking asylum, but a category that introduces a perspective that can renewal all the categories of political thought used since the times of ancient Greece to think about society and politics.

In his essay Agamben proposes a new idea of Europe. He writes about it as a space where everyone is in a state of exodus – a space where the concept of people as opposed to the concept of nation, regains its political meaning. Tadeusz Koczanowicz follows this line of thought and tries to show how the figure of a refugee can change our thought on the example of the concept of the people. He also shows how the perspective of a refugee re-introduces the idea of the people as a basic form of universal community. Community created by what is common, not exclusion of what is different.

The lecture «We refugees and we the people» by Tadeusz Koczanowicz took place on 15 November 2019 at the symposium «Crisis and Communitas» in Migros Museum für Gegenwartskunst, Zurich.

Tadeusz Koczanowicz (*1989) is a PhD candidate in Interart at University of Zurich and University of Warsaw. His interests are concentrated on nineteen-century anarchist thoughts of Edward Abramowski in the context of contemporary political philosophy of Giorgio Agamben. He is a graduate of Sociology, Anthropology and Cultural Studies at University of Warsaw. During his studies he spend an academic year at the Free University of Berlin where he studied Theater Studies. From 2015 until 2018 he was an editor at Res Publica Nowa, a journal about culture and politics.