«The function of art is to do more than tell it like it is: it’s to imagine what’s possible» – A lecture by Marc Streit 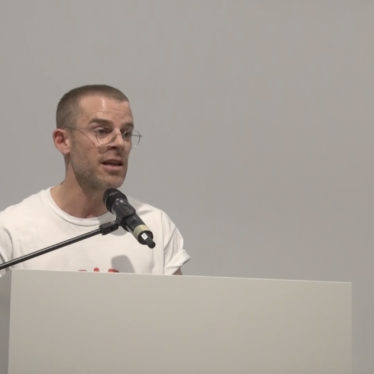 «With my initiatives I intend to gather people and foster real encounters – collective experiences. I consider art as a metaphorical exile, a place of resistance and action, that can and should create new perspectives and new meanings. I understand myself as a connecter, collaborator, organizer, contextualizer, producer, and host in the field of contemporary performance and dance.

My practice usually evolves out of a thematic focus and the various ways we coexist and inhabit the world. It usually starts from a very personal urgency to look at socially relevant topics or mostly things that either disturb or concern myself. It is always a balancing act to frame an artistic work and yet give the work itself enough room to let it speak for itself.

Increasingly, artists and cultural workers as well as organizations take part in international activities. Common projects, exchanges, residencies, co-productions and other forms of collaboration are to foster understanding for different practices and cultures as well as building bridges by ensuring personal encounters. Within the scope of such projects, “power relations” are not uncommon, because challenges created by unequal economic or technical conditions or a lack of certain human rights play a major role with regard to implementation of projects and influence them decisively.

A culturally contemporary, hybrid and fluid society does not legitimize the violation or disregard of marginalized cultures. However, political correctness should not be the sole incentive – permanent re-adjusting and the re-questioning of our own thoughts and actions are called for. This means a constant reflecting upon your own position in society and constantly refreshing your cultural memory.

A pluralization of the perspectives is called for, a critical questioning of perception and knowledge that is often neglected in a dominance culture. By doing so, I would like to underline singularity because, after all, whether Muslima, migrant, trans person, person of color, or member of any other minority, we are all basically on a quest for happiness and dignity. In argumentation, this is a fine line. I assume that we are interested in discovering similarities and not primarily in identifying differences but be interested what isn’t ours – for this is the only way to give rise to empathy and build a relationship toward the other.» – Marc Streit.

The lecture «The function of art is to do more than tell it like it is: it’s to imagine what’s possible» by Marc Streit took place on 15 November 2019 at the symposium «Crisis and Communitas» in Migros Museum für Gegenwartskunst, Zurich.

Marc Streit is a Zurich and Los Angeles based curator and networker in the performing visual arts space. He is the founder and curator of zürich moves!, a annual Festival for contemporary arts practices in performing arts, taking place in Zurich since 2015. Marc Streit worked at the Tanzhaus Zurich, where he still organises the yearly dance festival. He teaches dance studies at the Zurich University of the Arts, the Zürcher Hochschule der Künste.