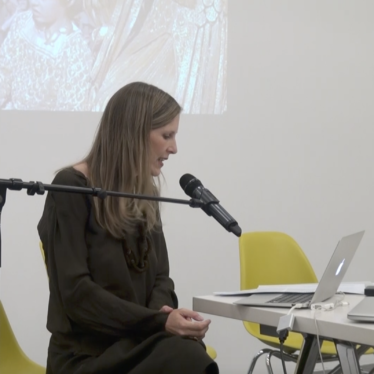 In his book “Peuples exposés, peuples figurants” (2012), Georges Didi-Huberman asks the question of how to make of the image a „common place“. In regard to cinema, this entails overruling the „commonplace of images of the people“ that is usually occupied by the extras as backdrop of the hero’s story and replacing it by a community that is based on effective participation. It is evident that this challenge is not only a question of representation, but of production and distribution in the process of collective work. From this viewpoint, Fabienne Liptay engages with the film La Commune (Paris, 1871) (2000) by Peter Watkins. She considers the historical relation between statistics and extra work (in German: „Statisterie“), the community also in the original usage of the Latin word „communitas“ for the obligation to submit charges and the Paris Commune with its demand for a „luxe communal“. In particular, she also talks about the conditions of production and the repercussions of the film from which the collective „Rebond pour la Commune“ and its social and political engagement emerged.

The lecture «La Commune» by Fabienne Liptay took place on 15 November 2019 at the symposium «Crisis and Communitas» in Migros Museum für Gegenwartskunst, Zurich. A written version of the lecture can be read at www.pismowidok.org

Fabienne Liptay is a professor of film studies at the University of Zurich, Switzerland. She studied film and theater studies as well as English language and literature at the University of Mainz, Germany, where she earned her doctorate in 2002. From 1999 to 2001, she worked as an assistant editor on the TV program 3sat Kulturzeit. She was a lecturer in the Department of Film Studies at the University of Mainz from 2002 to 2007 and assistant professor in the Department of Art History at the University of Munich from 2007 to 2013. She is coeditor of the quarterly journal Film-Konzepte and has published extensively on the aesthetics, history, and theory of film. Her research primarily focuses on film imagery and picture theory; on audio-visual narrative; and on the interrelations between film and the other arts and media.