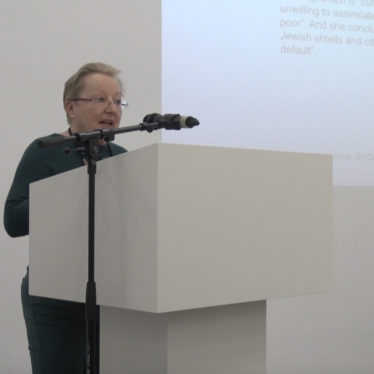 In her lecture, Małgrozata Sugiera premises on Arturo Escobar’s observation that the recent global Eco-Eco-Crisis is “the crisis of a particular world or set of world-making practices, the dominant form of Euro-modernity” (Designs for the Pluriverse, 2017). Therefore, what is urgent is “a transition from the hegemony of modernity’s one-world ontology to a pluriverse of socionatural configurations … reimagining and reconstructing local worlds” (ibid.). As she posits, one important way to enact nondualist, relational worlds as multiple onto-epistemic formations, while highlighting their internal and external interconnectedness is a new understanding of contact zones, introduced by a linguist Mary Louis Pratt in the 1990s. Looking for an answer to the question of how to rearticulate the colonial difference and power relations inherent to the concept, Malgorzata Sugiera recourses to the alter-anthropology of the Brazilian anthropologist Eduardo Viveiros de Castro and the idea of Buen Vivir of the South America, closely connected to Amerindian cosmologies and the notion of the communal.

In order to demonstrate a new concept of speculative contact zones in action, Malgorzata Sugiera takes a closer look at a fictional reconfiguration of two research methods: the archeological and the ethnographic in a series of happenings for three spaces within Madrid’s Museo National Centro de Arte Reina Sofia Of Lunatics, or Those Lacking Sanity by a Bogota-based artistic laboratory Mapa Teatro. Heidi and Rolf Aberhalden Cortes, with roots in the Colombian Andes and the Swiss Alps, experiment with creative, investigative, and interventionist procedures in multiple formats and fields. To show gold delirium of Spanish colonialism in Of Lunatics, or Those Lacking Sanity, they cooperated with a local, self-regulating community from the Marmato mine in Columbia, which had begun to be exploited before La Conquista and since has been productive, recently resisting the invasion of mining multinationals. This makes the installation a perfect point of departure for designing a new definition of contact zones.

Malgorzata Sugiera is a Full Professor at Jagiellonian University in Krakow, Poland, and Head of the Department of Performativity Studies. Having taught in Germany, France, Switzerland and Brazil, she has been a Research Fellow for multiple international foundations. Her research concentrates on performative arts and memory, gender and queer studies as well as performativity and materiality, particularly in the context of the history of sciences.

The lecture «Speculative Communities: Designing Contact Zones in Times of Eco-Eco-Crisis» by Malgorzata Sugiera took place on 14 November 2019 at the symposium «Crisis and Communitas».