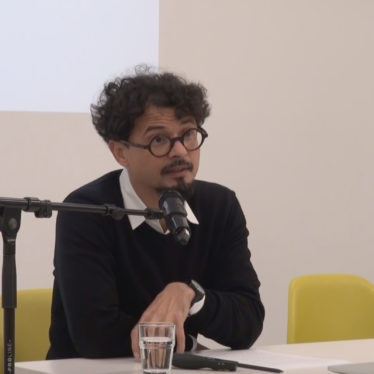 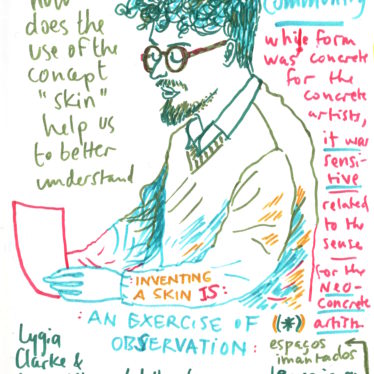 Eduardo Jorge de Oliveira presents in his lecture two topics: Firstly, what does it mean to “invent a skin” in Literature and Art in Brazil? Secondly, how does the use of the word “skin” allow us to better understand artistic practices in reinventing communities. In the first part, he presents the concept of “Inventing Skins” and develops its three meanings: as a phenomenological meaning, as a philological turning point and as a procedural concept – meaning procedures of work in literature, poetry and visual arts. In Brazil, Neo-Concretism was a movement that has often been associated with phenomenology due to the fact that several artists tried to override the divisions of artistic productions such as painting, sculpture or installation. At the end of the 1960’s and in the early 1970’s artists such as Hélio Oiticica (1937-1980), Lygia Clark (1920 – 1988) or Lygia Pape (1927 – 2004) created ‘new skins’ combining social structures and psychological dynamisms. This way of conquering the social, the psychological and the plastic space is well linked with poetry. Some years before, Concretism was a movement which reconceptualized poetry as a graphic object even though the written text was also essential. That is the reason why Eduardo Jorge de Oliveira explores ‘Skin’ from a philological framework. As we are shifting our focal point to the medium on which writing is produced – paper, paintings, objects – “skin”, as a medium, can also became a reinvented space. ‘Skin’ assembles at the same time “form” and “feeling”. Reading the skin as a structure, we can analyze the work of other artists, like Arthur Bispo do Rosario (1909 – 1989), Mira Schendel (1919 – 1984), Miguel Rio Branco (1946), Cildo Meireles (1948), Leonilson (1957 – 1993), Rosangela Rennó (1962), Nuno Ramos (1960) and Ricardo Aleixo (1960). For Aleixo, poetry is a complex structure involving photography, performance, radioart, books, exhibitions, cultural journalism, cultural traditions, gestures, dance and, mainly, voice. The voice is one of the skins that we will discuss: It is a “phonic skin”, in the words of the Italian Philosopher Emanuele Coccia, in The Sensible Life. Eduardo Jorge de Oliveira analyzes how these skins invented in Brazilian Art have had a historical significance in reinventing community vocabularies and strategies for artistic productions.

Eduardo Jorge de Oliveira is assistant professor at the Department of Roman Languages (Romanisches Seminar) at the University of Zurich. He is an associate researcher at the Center for Art and Theory of Culture (Zentrum Kunst und Kulturtheorie – ZKK) and the Center for Latin American Studies (Lateinamerika Zentrum – LZZ) of the University of Zurich. In Brazil, he has published «A invenção de uma pele Nuno Ramos em obras» (São Paulo, Iluminuras, 2018), a work resulting from the thesis defended in Literary Theory at the Federal University of Minas Gerais – UFMG and the Department of Philosophy at the École Normale Supérieure – ENS – Paris. He was a post-doctoral student at CEHTA – Centre d’Histoire et Théorie des Arts de l’École des Hautes Études en Sciences Sociales – EHESS – Paris.