Image as gesture: notes on Aernout Mik’s Communitas and the modern political film 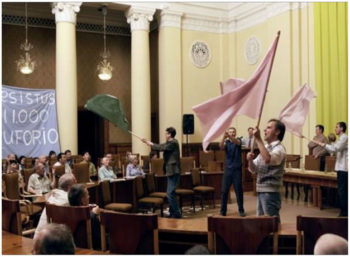 Walking through Aernout Mik’s exhibition Communitas, dwelling in the encounter with the people and situations in front of and on the screens, one is struck by the cinematic and political qualities of the gestures in these powerful video installations. In this article some ﬁlm-philosophical reﬂections on the silent performative force of the image as gesture and as politics will be explored.

The process of political and economic transformation which started in Poland in the late eighties is narrated in terms of regaining freedom and establishing democracy. The end of the totalitarian regime also brought the end of censorship and political persecution, the beginning of the free market, and the free flow of commodities. However, on the […]