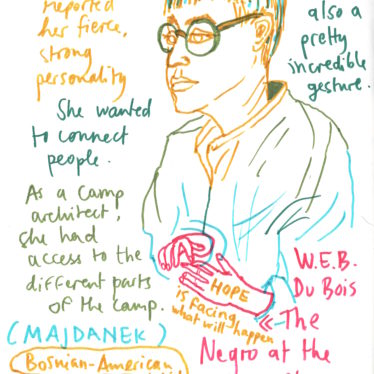 If as Ernst van Alphen claims, «affect is the opposite of personal: it is social.» What it means is not so much that affects are not owned by individuals but rather, that their very origin is social, they are produced by and in interactions with numerous agent such as other people (their bodies most specifically) but also objects and environment. People can be brought together as communities not because they feel the same things based on the dominant structures of feelings (structures still deeply embedded in the symbolic order) but rather because they are affected of affectively interpellated by others – others whose place in the symbolic order is predetermined (also affectively) – in ways that uncover the structures of oppression and call for self-aware modes of collective action. The experience of affect as a communal power can be confusing and liberating, it allows for new forms of judgement, solidarity, and memory, etc. Katarzyna Bojarska looks at the cases of art-related practices in relation to specific historical and political events when such communities are being envisioned and established even if momentarily, fugitively. As such they can still provide a point of reference if not heritage to be claimed our own.

The lecture «Divided we stand or revolutionary love in the making» by Katarzyna Bojarska took place on 15 November 2019 at the symposium «Crisis and Communitas» in Migros Museum für Gegenwartskunst, Zurich. With an Introduction by Tadeusz Koczanowicz.

Katarzyna Bojarska is a art and literature critic, translator and assistant professor at the Institute for Literary Research of the Polish Academy of Sciences in the Late Modernity Literature and Culture Research Group, member of the Franz Kafka Muri University in Warsaw. Laureate of the Fulbright Scholarship (Cornell University). Author of the texts and translations, interested in relations between art, literature, history and psychoanalysis, translator of Michael Rothberg’s Multidirectional Memory. Remembering the Holocaust in the Age of Decolonization (Warsaw, 2016) and Susan Buck-Morss’ Hegel, Haiti, and Universal History (Warsaw, 2014). Author of the book Wydarzenia po Wydarzeniu: Białoszewski – Richter – Spiegelman (Warsaw, 2012). From 2011 and 2014, she was a member of the editorial team of Teksty Drugie, as well as co-founder and editor of Widok. Theories and practices of visual culture.